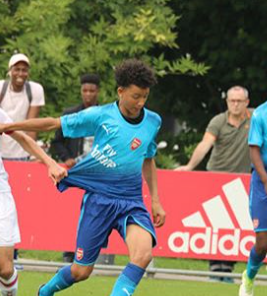 Arsenal have named their squad for the Dallas Cup, with schoolboys Kido Taylor-Hart and Nathan Butler-Oyedeji amongst those included.

The Gunners will field an U19 squad at the prestigious tournament and further schoolboys have been included in Yunus Musah, Miguel Azeez and Mazeed Ogungbo.

Other notable inclusions are Bayli Spencer-Adams and Jordan McEneff, who have both been out injured, and goalkeeper James Hillson, who is on loan from Reading.

Goalkeeper Arthur Okonkwo has remained in England so that he can feature for the U23s against Chelsea next week, with Tyreece John-Jules, Bukayo Saka and Xavier Amaechi also falling into that category.

Karl Hein, Joel Lopez and James Olayinka miss out due to injury.

This tournament could be especially useful for the likes of Alfie Matthews, Matthew Dennis and Ryan Alebiosu, who haven’t yet established themselves as regulars in the starting lineup for the U18s.