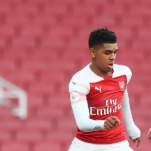 A technically gifted forward who is a product of Arsenal’s Hale End academy, John-Jules spent time on loan at Lincoln last season, scoring once in seven appearances for the League One side.

The youngster, who can also play out wide or in the number ten position, came close to making his competitive debut for the first-team and was named on the bench against Chelsea in the Premier League.

John-Jules previously scored for the senior side in a friendly against Al-Nasr in Dubai in 2019.

A hard-working player, he has scored some impressive goals at youth level, none more so than a superb flick against Everton for the U23s last season.

This season he will be hoping for more involvement in senior football and could finally make his Arsenal debut.