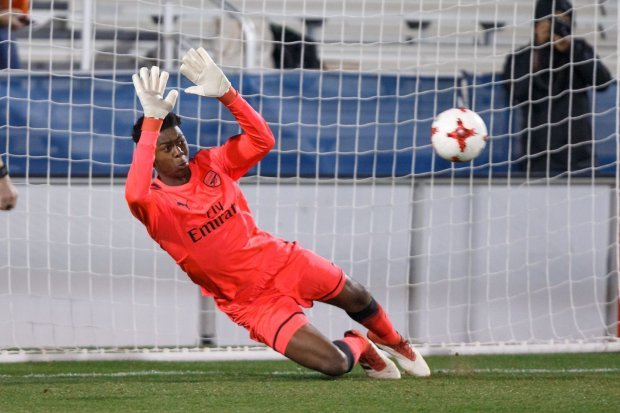 Arsenal goalkeeper Deyan Iliev has been ruled out for two weeks with a shoulder injury.

The 24-year-old will be absent for tomorrow’s U23 clash at home to Derby County and is also expected to miss the game against Chelsea at Stamford Bridge next week.

With Iliev unavailable, it seems likely that Arthur Okonkwo will receive another opportunity to impress against Derby having kept a clean sheet on his debut for the second-string against West Ham United.

The 17-year-old has trained with the first-team this week and also recently travelled with the squad to Dubai.

Okonkwo was left out of the squad for the U18s’ win against Reading on Saturday, indicating that he is set to face Derby.

Ordinarily, the Hale End product would also start against Chelsea but the situation is complicated somewhat by the fact that Arsenal are involved in the Dallas Cup, a competition that Okonkwo would usually be called up for.

If Iliev is still out then it is possible that Arsenal could elect to keep Okonkwo in England so that he can face Chelsea.

Arsenal are still without Karl Hein due to injury, but can call upon Tom Smith, James Hillson and schoolboy Hubert Graczyk.