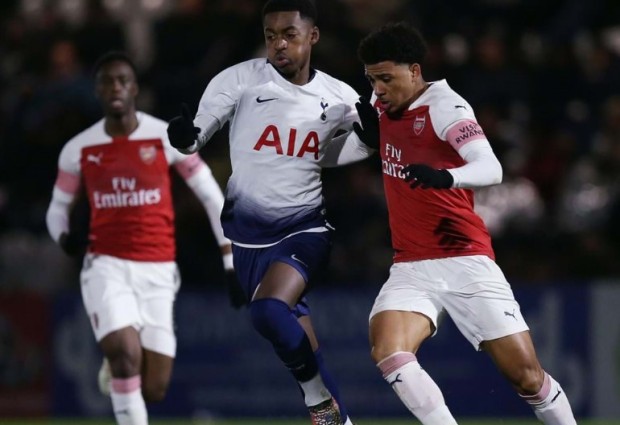 Before this game the focus was on whether Xavier Amaechi and Bukayo Saka would start as Arsenal looked to make it through to the fifth round of the FA Youth Cup.

As it transpired, the two hugely talented wingers were both involved from the outset and they both had a pivotal part to play as Arsenal beat Tottenham Hotspur 5-2 after extra time in a high octane encounter.

With Bayli Spencer-Adams out injured, schoolboy centre-back Mazeed Ogungbo was given a starting berth, while in midfield Jordan McEneff was preferred to James Olayinka.

Perhaps the most surprising inclusion was that of Ben Cottrell, whose impressive form for the U18s in the league saw him selected ahead of Trae Coyle and Sam Greenwood.

Given the rivalry between the two clubs, and the fact that both sides have been impressive in the league this season, an intense encounter was expected.

That proved to be the case from the first whistle, with each player who had possession constantly being harried by the opposition.

Tottenham almost made a mistake on one such occasion as a back pass nearly resulted in an own goal.

The visitors soon gained their composure, however, and they took the lead in the eighth minute when Armando Shashoua slotted home after Arsenal were unable to deal with a cross.

The lead didn’t last for long, though, with Cottrell justifying his selection with a fine strike in the 13th minute that caught Tottenham out.

Arsenal suddenly had much in the way of momentum and were adamant that they should have been awarded a penalty when Folarin Balogun was challenged in the area, but the referee waved play on.

Tottenham took full advantage and proceeded to make it 2-1, with their second goal similar in style to their first as a cross was sent in after Vontae Daley-Campbell was caught out and this time J’Neil Lloyd-Bennett scored.

In what was now a pulsating contest, Amaechi embarked upon an excellent run, although his subsequent shot was saved.

Despite that, it was Tottenham who ended the half in the ascendancy, and they merited their lead going into the interval.

Arsenal made a change at the start of the second half, with Olayinka replacing McEneff, who seemed rather rusty having only recently returned from injury.

Daley-Campbell wasn’t at his best in the first half, but he improved significantly after the restart and on one occasion got forwards well only for his effort to be off target.

Having not been given a penalty earlier on, Arsenal did eventually get one when Amaechi was brought down, with Saka stepping up to score from the spot.

Mark McGuinness had to be alert at the other end, though, to make a crucial block shortly afterwards.

The Arsenal supporters, buoyed by their team’s efforts, were now in full voice, and Ken Gillard’s side were starting to carve out chances with increasing regularity.

Firstly Matt Smith played a superb pass into the path of Balogun, who saw his shot saved, and then Amaechi came close to scoring.

The game then became rather scrappy, with both sets of players becoming tired and some late challenges being made. McGuinness and Smith both received yellow cards, and extra-time seemed a formality.

That proved to be the case, and Arsenal started extremely well in the first half of extra-time, with Amaechi making it 3-2 as he scored from close range after good work from Balogun.

Then it was 4-2, with Balogun this time on hand to score after Amaechi’s initial effort was blocked.

The Arsenal supporters were certainly enjoying themselves, singing ‘is there a fire drill?’ as some Tottenham fans elected to leave early.

Arsenal effectively secured victory early in the second half of extra-time, with Saka scoring the goal of the game – a fiercely struck effort that left Tottenham goalkeeper Josh Oluwayemi with no chance.

That was that, and Arsenal saw out the game as they brought on Coyle and then Greenwood.

The final whistle blew, with Arsenal’s place in the fifth round, where they will host West Bromwich Albion, confirmed.

It cannot be emphasised enough how impressive a victory this was, with Tottenham boasting one of the standout teams in England at this level at present.

Saka and Amaechi certainly deserve much praise, but there were others who also made a significant contribution, not least Daley-Campbell, who became increasingly effective as the game wore on.

Cottrell, too, had some impressive moments, and Ogunbgo coped very well at centre-back for the most part.

There is more to come from this team, especially with Tyreece John-Jules still to come back from injury, and it is hoped that the young Gunners can enjoy a lengthy run in the competition.

The last time that Arsenal beat Tottenham in the Youth Cup – ten years ago – they went on to win the trophy. Could history repeat itself this year?