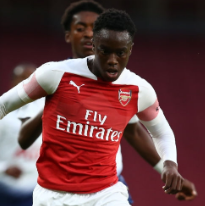 An energetic midfielder, Olayinka shot to prominence in 2019 when he scored a superb goal for the first-team in a friendly against Colorado Rapids.

Last season he was sent on loan to Northampton Town in the second half of the campaign and impressed on his debut before injury prevented him from featuring again.

The youngster, who loves to push forward from midfield, has featured heavily for Arsenal at youth level but hasn’t always managed to perform consistently.

This season he could go on loan again in order to gain further experience.