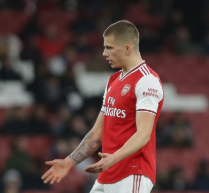 A defender who joined from Ipswich Town as a schoolboy, Clarke previously played in midfield.

Following the departure of Robbie Burton to Dinamo Zagreb he was named the captain of the U23 side and produced some encouraging displays at that level.

A fully committed player, Clarke could go on loan at some point this season and has the correct mentality to succeed in senior football.