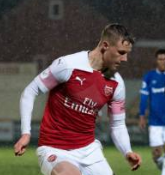 International: Northern Ireland U21 (called up at senior level)

A centre-back who is used to overcoming adversity, Ballard was previously released twice by Arsenal before the club reversed their decision on both occasions.

Last season he experienced more misfortune, suffering a serious injury early on in his loan spell at Swindon Town.

However, he made his comeback for Arsenal U23s later in the season and will now want to gain more first-team experience this season, probably out on loan.

An impressive reader of the game, Ballard has excellent leadership qualities.