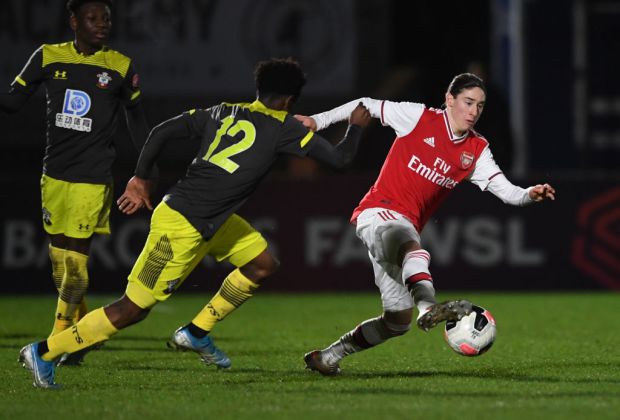 Arsenal’s exciting U18 side commenced their season with a 4-2 victory at home to Southampton today.

Coach Ken Gillard was able to select from a host of players and he elected for Hubert Graczyk in goal, with the back four comprised of Levi Laing, Zach Awe, Alex Kirk and Mazeed Ogungbo. Charlie Patino partnered Mauro Bandeira at the base of midfield, while ahead of them Marcelo Flores, Omari Hutchinson and Kido Taylor-Hart supported striker Luke Plange.

Khayon Edwards, Taylor Foran, Billy Vigar and Jack Henry-Francis, who all trained with the first-team this week, were on the bench along with goalkeeper Ovie Ejeheri.

Nathan Butler-Oyedeji and Jason Sraha weren’t involved, presumably due to injury, while the likes of Luigi Gaspar, James Sweet, Charles Sagoe Junior, Henry Jeffcott, Zane Monlouis, Brooke Norton-Cuffy and Remy Mitchell also weren’t in the squad, emphasing just how many players Arsenal have at this level.

Arsenal took the lead in the 19th minute, with Plange finding the net after he was teed up by Bandeira.

It was 3-0 before the break, with Ryan Finnigan scoring an own goal and Flores then scoring, with the highly-rated Hutchinson assisting him.

Southampton threatened to stage a dramatic comeback late on as Goran Babic scored a penalty in the 81st minute before Jayden Smith netted in the second minute of stoppage time.

Arsenal would score again, however, with Edwards getting what is likely to be the first of many goals at this level, when he scored in the closing stages.