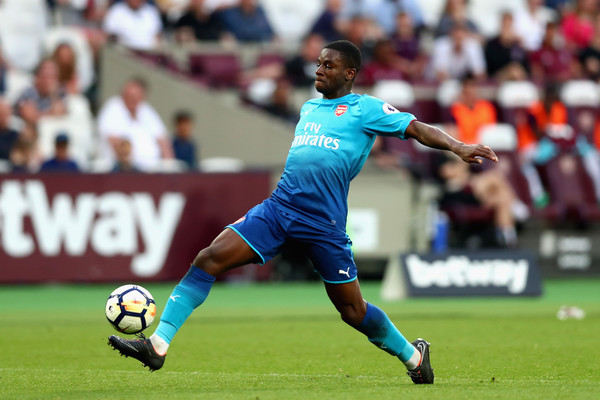 It is almost five years since Jordi Osei-Tutu joined Arsenal and the youngster is still yet to make a competitive appearance for the first-team.

Osei-Tutu has featured for the first-team in friendlies and has been named on the bench in various competitions including the Premier League, but he is still waiting to make his major breakthrough.

This season the right-back has been spending time on loan in the German second division with VfL Bochum, for whom he has often performed impressively when called upon despite not always featuring regularly.

On some occasions Osei-Tutu has been used as a right-winger, the position that he previously played at Reading prior to joining Arsenal.

Part of the Arsenal U23 side that won the Premier League 2 two years ago, there was bewilderment amongst the youngsters at London Colney last season when Osei-Tutu wasn’t given a look in by Unai Emery even when the Gunners’ right-back options were thin on the ground with Hector Bellerin out injured.

Osei-Tutu could be forgiven for thinking that he could have fared better than Stephan Lichtsteiner and perhaps even Ainsley Maitland-Niles if he had been given opportunities over the past couple of seasons.

This summer it is likely that, amongst all the other matters that they have to deal with, Arsenal will have to make a decision on Osei-Tutu’s future.

Although he is reportedly under contract until the summer of 2023, Osei-Tutu is now 21 years old and will have to be listed as a senior player if he is to feature for the club in the Premier League and European competitions from here on in.

There remains uncertainty regarding Arsenal’s right-back options. Bellerin is established as first-choice but still struggles with injuries, Cedric Soares hasn’t featured since joining on loan from Southampton and Maitland-Niles has stated that he doesn’t enjoy playing at right-back.

Could Osei-Tutu, after a lengthy wait, finally receive an opportunity to impress? He deserves a chance, with his tenaciousness and reading of the game valuable attributes.

It appears more likely, however, that Arsenal will look elsewhere in their quest to bolster their squad. If such a scenario transpires it would be a shame, with Osei-Tutu having worked extremely hard in recent years as he has improved significantly since joining the club.