Arsenal have named their squad for the pre-season tour of the United States, with Robbie Burton receiving his first senior call-up.

The 19-year-old has featured frequently for Arsenal at U23 level and captained Steve Bould’s side against Boreham Wood last weekend.

In addition to Burton, Matt Macey, Dominic Thompson, James Olayinka, Bukayo Saka, Zech Medley, Tyreece John-Jules and Gabriel Martinelli have all been called up. There is no place in the squad for Xavier Amaechi, Ben Sheaf or Deyan Iliev.

Krystian Bielik, who represented Poland at the U21 European Championship, also isn’t included.

Emile Smith Rowe, Reiss Nelson, Eddie Nketiah and Joe Willock, who have all recently been promoted to the first-team, have also made the trip.

With regards to first-team players, Hector Bellerin and Rob Holding have travelled as they step up their recoveries from injury.

Captain Laurent Koscielny has refused to travel, while Lucas Torreira, Mohamed Elneny, Matteo Guendouzi and Alex Iwobi miss out due to their international commitments this summer.

Takuma Asano, who has been linked with a departure from the club, has also been left out. 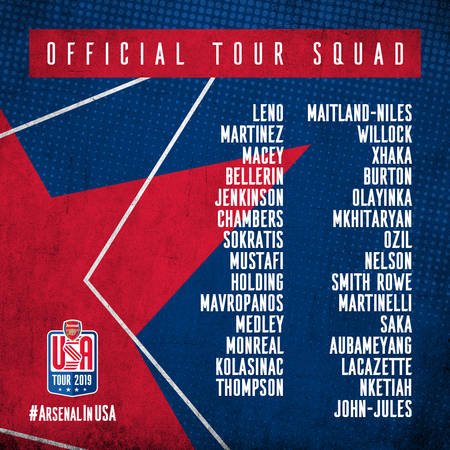