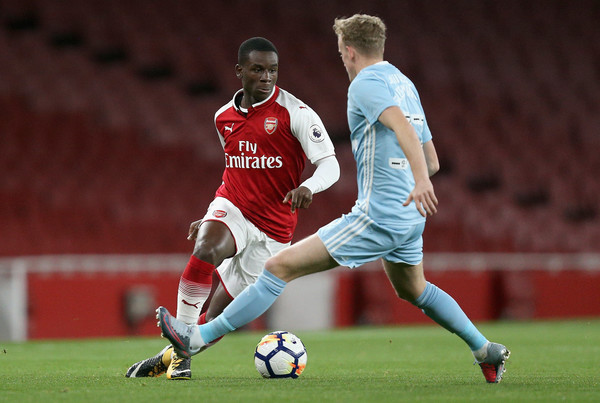 It was rather alarming when the summer transfer window slammed shut without Arsenal having an obvious second-choice option at right wing-back in their first-team squad.

Hector Bellerin is firmly established as the Gunners’ first-choice in that position but an  injury to the 22-year-old would leave the club in a difficult situation and may even prompt a reversion to a four-man defence.

If Arsenal are to persist with a 3-4-2-1 system Arsene Wenger must decide upon a deputy to Bellerin at some stage but there are a dearth of options in the first-team squad.

Mathieu Debuchy seems more suited to playing at centre-back in this formation, as does Calum Chambers, while Ainsley Maitland-Niles is a player whose best qualities are attacking rather than defensive.

Francis Coquelin, who has previously played at right-back, is one possible option to fill the void but so far the Frenchman has continued to be deployed as a defensive-midfielder when he has been called upon.

It could well be the case, then, that Wenger will have to turn to Arsenal’s U23 squad to find his back-up option on the right side of the defence.

Reiss Nelson appears to be his preferred choice at present, with the starlet having featured there in cup games and in pre-season but he would certainly be more effective as one of the two attacking midfielders behind the main striker.

Another possible option to pursue, and perhaps the most viable one, is that of Jordi Osei-Tutu.

The 19-year-old, who joined from Reading a couple of years ago, hadn’t made a competitive appearance for Arsenal U23s until the start of this season but he has been one of the club’s outstanding performers at that age level in recent weeks.

Osei-Tutu has played the full 90 minutes in each of Arsenal’s last five U23 fixtures and has especially caught the eye with his contributions in the final third as he has delivered some teasing crosses and also got into shooting positions himself.

There are some concerns about Osei-Tutu’s game defensively but he is starting to improve in that regard and was particularly resolute in the second-string’s 2-0 victory over Sunderland at Emirates Stadium this week.

Quick and strong, while also good technically, Osei-Tutu loves to push forward, which is no surprise given that he was previously a winger prior to being converted into a right-back. Playing as a right wing-back enables him to combine the attributes he has gained from both positions to devastating effect.

Osei-Tutu’s progress has been such that Tafari Moore, who is older than him, appears to be being phased out, as does Aaron Eyoma.

After gaining a considerable amount of experience at U18 level, which encompassed some mixed performances, Osei-Tutu has certainly proven himself for the U23s so far and has been rewarded with inclusion in the first-team squad for tonight’s Europa League game away to Red Star Belgrade.

While there is a possibility that Osei-Tutu might not make it onto the pitch in Serbia, he has a good opportunity of being involved in the some capacity in the Carabao Cup tie at home to Norwich City next week and the prospect certainly seems to have impressed Wenger.

If he continues to develop and seizes any slither of an opportunity he is presented with in the first-team then Osei-Tutu could well emerge as Bellerin’s back-up, even though not many would have envisaged such a scenario occurring just a few months ago.