After three long years of waiting, Joel Campbell may finally receive the opportunity of representing Arsenal this Summer, but first the 21 year old has an excellent chance to underline his credentials ahead of next season whilst representing Costa Rica at the World Cup.

His performance this evening, as his nation recorded a shock 3-1 victory over Uruguay in their opening Group D fixture, perhaps demonstrated just why Arsenal went to such lengths to recruit him from Saprissa in 2011. The 21 year old equalised with a fine strike to cancel out Edinson Cavani’s first-half penalty, then, after Oscar Duarte had given Costa Rica the lead, Campbell, by now stationed on the right flank, helped his country to seal a famous win by threading a precise ball into the path of substitute Marco Ureña, whose finish was unerring. 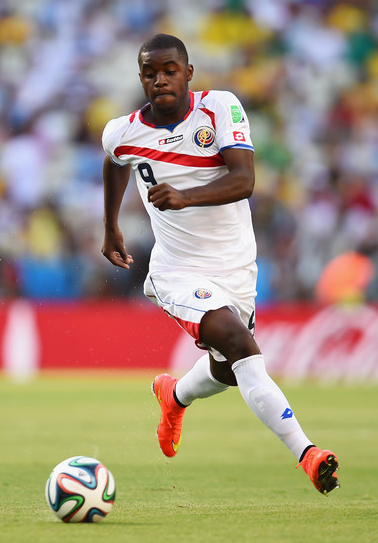 In addition to his goal and assist, Campbell contributed much else besides. He came perilously close to adding to his tally with a venomous strike that went just wide and he worked tremendously hard throughout. Deployed as Costa Rica’s lone centre-forward, he was faced with the unenviable task of attempting to penetrate the usually miserly Uruguayan central-defensive partnership of Diego Godín and Diego Lugano, but the youngster was unfazed. Uruguay’s dominance early on dictated that Campbell was often forced to drop deep to receive possession and, in the opening period, he was presented with precious little in terms of goalscoring opportunities.

The former Lorient, Real Betis and Olympiacos loanee did, however, provide some tantalising glimpses of his undoubted quality in the first 45 minutes. One surging run caught the eye and, later in the half, he also came close with a powerful strike from distance. It is clear that he requires a little more tactical understanding, but Campbell comes across as an individual laced with the technical qualities for which Arsenal are renowned. His willingness to shoot from distance was also encouraging.

In the second-half, as Costa Rica gained more of a foothold on proceedings, he was presented with the opportunity to impress and he seized upon it in an instant. His pace and trickery caused numerous problems for the opposition. By the end Campbell had tormented Uruguay to such an extent that he was the victim of a cynical challenge by Maxi Pereira in the closing stages, which led to a red card.

Campbell’s versatility adds a further string to his bow, as he has been deployed on the right flank during the majority of his loan spells. His ability to play either as a winger or a centre-forward, two positions in which Arsene Wenger’s side require reinforcements, could well present him with a chance when he returns from his excursion in Brazil.

With his work permit problems firmly behind him, Campbell will seek to break into Wenger’s plans this Summer. It is important not to get too carried away on the back of one performance, but, at present, he certainly seems a much preferable option to Yaya Sanogo or Benik Afobe for a place in the squad.